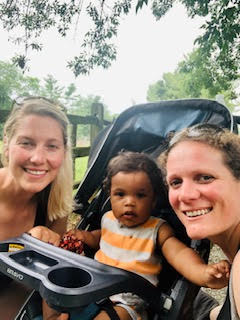 My plan my whole pregnancy was to have my son at The Birth Center.  My wife and I fell in love on our initial tour and so it was really set in my mind that I was going to deliver my baby there.

I also set it in my mind that I would give birth earlier than my due date and that I would have the kind of labor where the mom was able to walk around and eat popsicles with a few occasional painful contractions, nothing I couldn’t handle!  I had created a playlist featuring a lot of Lizzo and was treating labor like a really hard workout that I would be able to just will myself through.

Well, week 38 and 39 flew by and I was at my due date and – nothing.  I remember Katie Mansur calling me on my due date explaining everything we would do to try and get me to go into labor and (if we couldn’t) then explaining how I would have to go to the hospital.  I remember just crying on the phone because I knew that my body was not on the verge of labor and for my type A personality this whole not going exactly to plan was devastating.

My pregnancy was fairly easy with no major issues or discomfort and I kept feeling such frustration that my body wasn’t going into labor.  I had pretty much everything The Birth Center can do to entice labor to get started- from multiple scrapings, to foley bulb, lots of castor oil, even Peggy helping us try some relaxation and hypnobirthing therapies.  Nothing worked, so finally we went in 13 days past my due date to get my water broken. If labor didn’t progress I was heading to the hospital for induction.

It wasn’t that I was opposed to a hospital birth, many of my friends have delivered at Christiana and I know they’re amazing over there. Before touring TBC I was really set on a hospital birth – it’s just I had this image of meeting my son for the first time in the blue room and I had started reconciling with the fact that most likely I would be meeting my son in a hospital, something I hadn’t really planned for or imagined.  Lauren broke my water and after what felt like the millionth fetal stress test we went home to wait.

Within an hour I was calling TBC because if what I was feeling wasn’t labor then we had a problem.  My labor was all in my back and I hadn’t really visualized that would be how labor felt.  I never felt any pain other than the back contractions during my whole delivery and reflecting on it now it definitely wasn’t what I imagined labor to feel like, but then again I don’t know if you can really prepare for what contractions feel like no matter where they are!

Things progressed really fast and around 11am we were heading into TBC.  The ride there was really unpleasant but definitely worse for my poor wife who had to drive us there amidst my screaming, sitting of any kind did not feel great so being in a seatbelt in the car was agonizing.  Once we got there Lauren tried to have me lay on the bed to check where I was at but I wasn’t able to lay down or sit at all, the back contractions were too intense. So, she had me get in the tub.

The tub was NOT something I had planned either, I remember learning about it in my birth classes but just really not feeling it and luckily Katie and my wife had suggested I stay open minded about it.  It was the best thing ever!  Instantly it felt so much better than standing or any other position I had tried since feeling contractions.  I had been pushing for awhile when Lauren came to the front of the tub to tell me that my son was “sunny-side up.” She explained that what this meant for me was that labor was going to be pretty intense but relatively short.  I remember her coaching me so calmly about how to push more effectively and she did such an amazing job of keeping me updated about where labor was because my contractions were so close together, I was feeling exhausted.

I remember laying my head on the side of the tub and feeling like I could honestly fall asleep between them because I was so tired.  Lauren was so great and having only met her that morning for the first time, I felt like I had known her my whole pregnancy. She was so in tune with what I needed in the moment and both of the nurses that helped me deliver, Lauren and Hannah, were the same.  It’s like they knew exactly when I needed updates and knew when to suggest different things and when to just let me cry.

I remember having Katie help me lay out my birth plan and her asking me what I was scared of most.  I told her that when stressed I tend to yell, and I was worried about yelling at a midwife or my own wife because of the pain, and I didn’t want to be that person.  Katie laughed and said she had been yelled at more times than not and not to worry about it.  Well, I made it through the whole delivery without yelling until I think the last 10 minutes.  Lauren had updated me that we had gotten my son past my pelvic bone and that we were in the home stretch and something just felt way different and painful.  I yelled at Lauren to stop doing what she was doing because it did not feel good, and my wife calmly let me know that no one was touching me at the moment.  Lauren told me that was actually my son’s head and he was almost out!  I remember feeling so much at that moment.  There was definitely pain but there was excitement, relief, exhaustion, anticipation, and such joy.  I was there, I had almost done it and we were meeting our baby so soon!

The last moments of delivery are hazy.  I remember them coaching me that I had one push left and he would be here. He needed to be delivered under water because his head was already out, so my wife had to help keep my hips down on the last push so that he stayed under water.  I remember as soon as I finished that push and he was out, my whole body relaxed.  The contractions instantly went away for me. Seeing him for the first time, nothing else mattered.  The extra weeks of pregnancy, all the procedures to start labor, the back contractions – nothing mattered because he was there. He was in my arms and it felt like the world just stopped for a second.  Really, cliché – believe me I know.  I don’t have that many emotions typically, but no matter how tough you think you are you’ll feel the same trust me.

Maverick Holden was born at 4:44pm and the popsicles I had brought, the playlist I had made, the cute sports bra I had shopped for – none of those things were even thought about or utilized.  One of my favorite memories from that day is laying on the bed with Mav on my chest and Katie came in to see him and us!  If you met Katie Mansur I’m sure she was your favorite so I know I’m not alone in this opinion, but she had just helped me so much, she listened to me cry and helped me create a plan, and knew what I needed so many times during the almost 42 weeks of pregnancy. It just meant so much that she made time to come over and meet him.

My wife and I were really adamant that it just be the two of us at delivery and that when we got home is when we would have family come meet him, but having him at TBC and having all the midwives and nurses who had helped us along the way come in and congratulate us and get to meet Mav just felt like family and it was really special to be able to experience that for our first child!