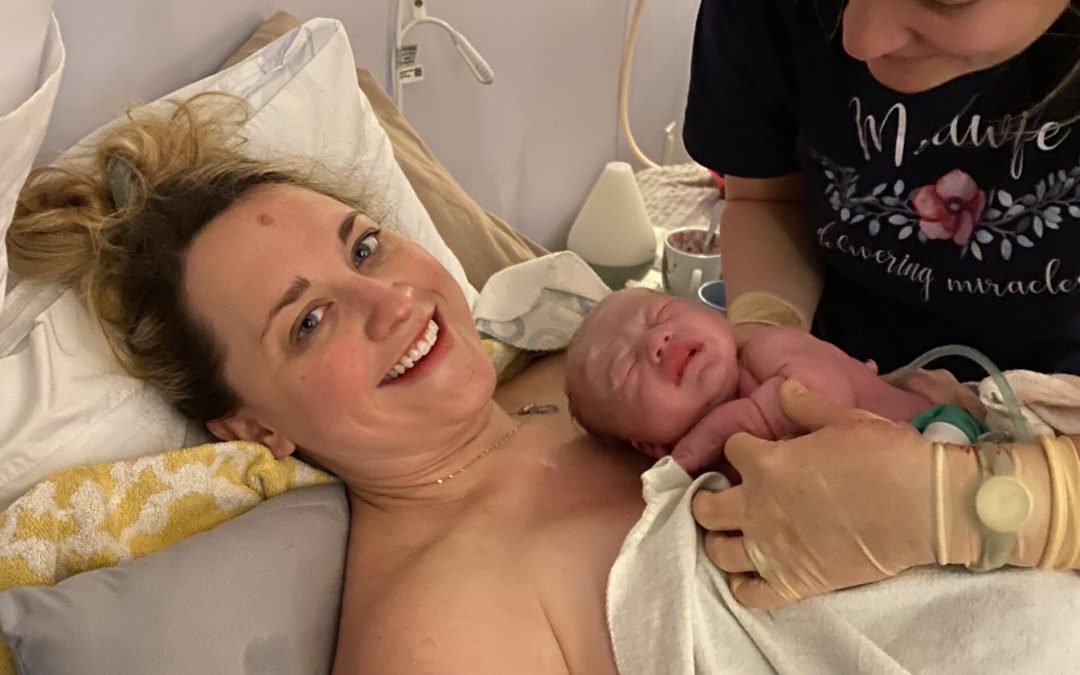 When I took a pregnancy test on July 7, 2019 and it came out positive, I proceeded to take another three tests over the course of the next 48 hours to rule out any error from the tests. I had a nutritionist and weighed out my food to make sure I was hitting a daily protein, fat and carbohydrate goal. I bought an at home blood pressure monitor and tracked it daily in an app. I opted to track my sugars at home for two weeks versus doing the glucose test. My results were put into Excel and then graphed and printed out for my doctor to include in my file. We hired Lynne from the Birth Center to be our birth doula. Car seats were checked twice, the diaper log was printed and next to the changing table, an Excel file was made for the average amount of diapers that would be needed based on an assumed birth weight and six weeks of postpartum meals were not only prepped and frozen in our freezer, but a schedule for when they would be eaten along with the instructions for how to reheat them were included on the tops of the containers. Can you tell my husband, John, and I are both engineers?

John gets four weeks of paternity leave. We don’t have family or friend support where we live currently so he would take three weeks off after our son, Benjamin, arrived to help while I was in the crucial time recovering from giving birth and then he would take the fourth week when we hit the first sleep regression. We interviewed seven postpartum doulas and finally decided to hire two to help when John had to return to work. They both offered night time support in case we needed it, but we were set up to have them alternate for the day-shift Monday-Thursday. They were prepaid for eight weeks out so we didn’t have to stress about payments. A dog walker was hired and she did several “trial run” walks with our dog, Sherlock, so he knew who she was and what it meant when she arrived. She knew the passcode to get into our home so she didn’t have to knock in case the baby was sleeping.

Two hospital bags were packed, just in case something happened to one of them. Two diaper bags were loaded. To say we prepared would probably be an understatement.

Of course we knew things would pop up that we wouldn’t know how to handle. We weren’t naïve enough to think we could control, plan and know everything going in. But, we felt confident that between resources such as the postpartum doulas, the breastfeeding and postpartum support groups I already had on my calendar, my therapist and the countless books we had bought and read, we knew where to turn when we did have an issue.

Benjamin was born on March 8th at 5:31AM at The Birth Center after 22.5 hours of labor. My beautiful, health—wait, he’s not screaming. Why isn’t he screaming? Why is the tone of the room not joyous? Why is Sarah Grace massaging him so hard, we didn’t discuss this in any of the birthing classes. Why are they putting oxygen on him? I can’t believe I just gave birth. How long have I been up for? What are they discussing now, I can’t hear them over the oxygen that’s being used on Benjamin. He weighs 7 lbs 3.5 oz, pretty much spot on what we thought! Wait, he has to go to the NICU? His APGAR score is too low? He still needs oxygen to help him breathe? I won’t get to try breastfeeding now? My husband has to leave to go with him to the NICU? I won’t get to be with my newborn for the first couple hours of his life?

No book can prepare you for this. You can calculate the probability of this happening and try your best to prepare yourself mentally and I am willing to bet you’ll still be caught off guard. We had prepared for a possible hospital transfer. We had prepared for a possible emergency C-section. We had not prepared for a 2.5 day stay in the NICU. A miss on our part? Probably. My pregnancy was healthy though. There was no indication of struggle during the labor. All signs pointed to this not happening.

Benjamin had amniotic fluid in his lungs that he coughed up within 6 hours of being delivered. He’s for all we know, a healthy, happy baby now and there is a very slim chance that he will have any negative side effects from needing oxygen for those first few hours of life. We learned later that this is more common that we initially thought and that what was done in the NICU was 100% routine for his situation.

We brought him home on Tuesday, March 10th. We had our postpartum doulas come on Wednesday and Thursday. The dog walker came on Wednesday. We reheated freezer meals, Benjamin gave us some trouble sleeping in his bassinet at first, my milk came in and I was engorged, all things that we knew were a possibility and we had plans in place to help us resolve. Enter Friday, March 13th. Benjamin’s original due date and the day we entered lockdown due to COVID.

Simply put, we had not prepared for a global pandemic to start when we brought home a newborn. A miss on our part? Definitely not. Mom groups that are usually flooded with questions about weight gain (it varies), tummy time (as much as they can tolerate) and sleeping patterns (good luck with that one) became flooded with “am I safe to go to the pediatricians?” “Is it safe to let my family see my newborn?” Slowly, things evolved. Support groups and doctor’s visits went virtual. A planned visit with family became Facetime. My sister’s wedding rescheduled to 5 months later. Getting Sherlock out for his daily exercise became our sense of relief from being home bound for days, weeks, months. We adapted, however, not without issues. Things that should be simple, such as Benjamin’s 1 month wellness visit, now became a question of how important is it that he’s seen in person? What if something is missed in just a virtual visit? A bad diaper rash took two different pediatricians, five total virtual visits, and finally a pediatric dermatologist in office visit to get resolved. Would this have been easier pre-COVID? Who knows and it does no good to even think about it.

One of the things that has stuck with me through the five-ish years I’ve been going to therapy has been gratitude journaling. I started it in my first year of therapy and now my husband and I do it together. I admit that since Benjamin has arrived I haven’t been as consistent about writing down my gratefuls every night, but I do try to at least think of them before I lay down to sleep. It can be hard to find things to be grateful for when it feels like the world is falling apart. However, I AM grateful for some things that COVID has changed in the last 4 months. My postpartum doulas only came once each, however, John has been working from home since Benjamin was born so I have the best postpartum doula I could ask for-Benjamin’s dad. My family has only seen Benjamin virtually, however, Facetime visits which never happened pre-COVID have become a weekly event. Breastfeeding support has been hard; it’s definitely a “hands on” job. However, I am now able to participate in the breastfeeding support group even though I live 1.5 hours away due to it being virtual.