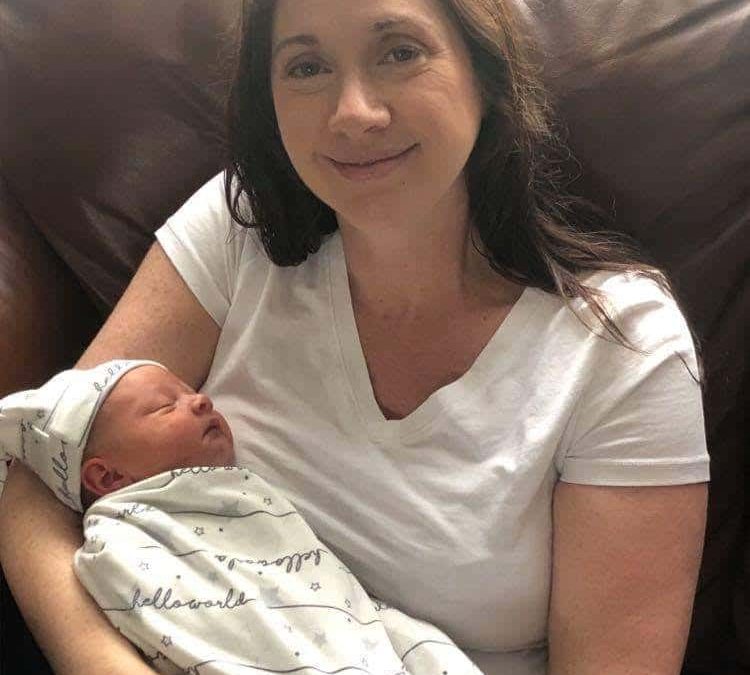 No. One. Else.  These three powerful words changed my entire birth plan.  I had my first child at Christiana Hospital and intended to have my second there as well.  Being an older “fairly crunchy” mom, I planned to have a natural birth but wanted the security of a hospital setting “just in case,” whether that was for the baby’s health or for me needing pain options.  Plus, after being told a million times that I was classified as high risk and geriatric because I was over 35 years old, the hospital seemed like the only reasonable option.  I also loved the idea of staying at the hospital for two days, with nurses to help me and meals brought bedside (the food was pretty good there!).  Then entered Covid-19 on the scene. My due date was smack in the middle of the anticipated peak.  Christiana Hospital was regularly changing their policies on how many support people and visitors could be there.  And oh those three dreadful words…hearing that I might have to go through labor and delivery without anyone at all was the final straw.  Granted the policy was almost always that one support person could attend, however the hospital did have a short period where no one was allowed with mom and knowing that I might be going into labor during the peak of the pandemic, I feared I would be alone.  This was devastating.  I heavily weighed what was important to me.  Our health trumped everything and I felt going into labor alone could seriously impact labor and our health (especially after some of the things I experienced with one nurse when I had my first child there).  I did have concerns over mine and baby’s potential virus exposure at the hospital and the ongoing shortage of PPE and masks.  How could I feel completely safe and comfortable there?  So, I decided to look into The Birth Center.  (It was either that or a local farm, I joked but was also sort of serious.)  I had only heard great reviews but had reservations.  After all, how could I possibly go home mere hours later?  What if things went wrong? But those concerns subsided after I spoke to the staff, other moms that delivered there, and, most importantly, my ob-gyn. Unbeknownst to me, my ob-gyn works with The Birth Center and he fully supported my decision.

I put the wheels in motion to switch practices at just over 37 weeks pregnant.  I felt confident that I had a few more weeks to go and was not in a huge hurry.  How wrong was I!  Surprisingly, just two days after my first appointment at The Birth Center, I stood in my bedroom wondering what was on my leg–my mucus plug fell out.  I felt mild cramping and thought it must be Braxton Hicks.  Yet, it did not go away and drinking water did nothing.  I called The Birth Center and my doula.  I immediately felt warmth and support.  I was advised to time the contractions and try to labor at home for as long as possible.  For the next few hours, I wondered if today was really “the birth day” and thought there was no way because I was only 37 weeks 5 days.  My hospital bag was not packed.  My toddler’s bag and care sheet were not ready to go.  The car seat was still in the basement.  No meals were cooked.  Being the meticulous planner, here I was, totally caught off guard and not ready. Baby was coming though!

For the next several hours, I alternated between laying in a bathtub filled with hot water and laying in my bed.  I had no desire to walk and “go about as normal” like I thought I would.  At one point, I laid in bed and just slowly, shallowly breathed until I fell asleep.  That was the most unexpected 90 minutes of sleep.  I’d wake for the contractions and go back to sleep. I kept in contact with the doula and she offered suggestions to ease the pain.  Eventually, she advised that I call The Birth Center, who said it was time to come in.  I quickly (well, quickly for being in labor) packed our bags and got ready to go.  I felt so scattered and that it was a scene of chaos as I tried to explain to my 2 year old that I was going to go have a baby.  When I had my first child, I arrived at the hospital only a few centimeters dilated and it was a very long painful process. I expected to go through the same again. Silly me – I was already seven centimeters dilated.  I was shocked and excited.

I had exactly who I needed for support in the room with me, which is what I really desired for this birth.  No more, no less.  When I arrived to check in, they quickly welcomed me into the room and asked if I wanted to try the tub, which I definitely did.  Loved adding Himalayan sea salts to it too! I could not believe how powerful the water was at easing the pain.  Everyone was calm and the environment was relaxing – such a stark contrast to the hospital.  Yes, they were wearing masks because of Covid-19 but there was nothing scary about it.  And yes, they no longer allowed unlimited people to attend but I had who I needed there and it was a much better policy than the hospital.  So I laid in that giant amazing tub with the doula doing counter pressure on my back for awhile and my support person holding my hand and encouraging me.  I did not have the candles and music like I pictured but I found that I really did not need it. All I wanted was dim lights and absolute quiet as I concentrated on breathing.  I managed each contraction by reminding myself “mind over matter” and envisioning what my body was doing.  I was so thirsty and everyone was giving me water but I found myself unsure how to pee.  I did not want to do it in the tub but could not fathom leaving that glorious tub for a painful walk to the bathroom. Not to mention having stage fright to go in front of everyone.  This was almost comical in the midst of being naked and in labor.  Given how important it was to have an empty bladder, I eventually went but it was a challenge.  I felt my energy dropping.  The Birth Center luckily had those old school rocketship popsicles.  They really hit the spot!  It was so different not being hooked up to monitors, or stuck in a bed with a mandatory IV, or being checked constantly.  Instead they listened to baby’s heart and let my body do what it wanted to do naturally.  The midwife finally said that it was time to go to the bed if I did not want a water birth.  So off I went.  The huge birth ball became my new best friend.  I hugged it while on all fours like it was an old friend.

As I transitioned to the final phase, I was scared, like terrified.  I had heard all of the terms, like ring of fire, and expected the worst pain.  However, that was not the case.  The team kept giving me encouraging words.  We laughed when my water broke because there were two very loud pops.  The nurse thought I had dislocated something and then I flooded the bed.  The team seamlessly cleaned it up and I kept going.  My body started to spontaneously push and I was encouraged to just go with what my body wanted to do.  I never felt so powerful before and could not believe what my body was doing.  They told me the baby’s head was coming and to keep going because I was almost done.  A few more pushes, the strongest pushes I could muster, and that was it.  It was truly an uplifting experience with so much positivity in those moments when I was terrified of what would come next.

Then my beautiful baby boy entered the world, almost twelve hours exactly from when I saw that crazy mucous plug stuck to my leg and thought “what the heck is that.”  He was placed on my chest and I savored those first moments.  I could not tell you what else was happening in the room because all I saw was my son.

I would have never dreamed that I would have a baby in the midst of a pandemic or that all of my birth plan would go to the wayside but I would not have had the birth go any other way, minus the pandemic of course.  I did not have any of the tools that I planned for-candles, focus picture, breathing lessons, music, etc-but I realized that I did not need any of it.  All I needed was water to lay in, people to support me, and a calm quiet environment.